Clock Donates Your Money To Charity When You Hit Snooze

Mall Shoppers Get $100 Bills
Next
Set of
Related
Ideas 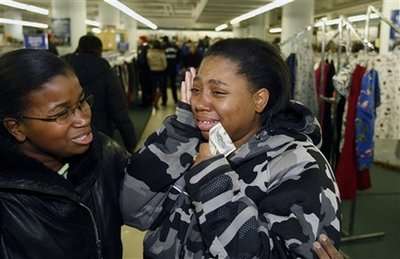 Guerrilla Secret Santas Give Out Cash in 3 States

Bianca — December 7, 2008 — Social Good
References: news.yahoo
Share on Facebook Share on Twitter Share on LinkedIn Share on Pinterest
One of the most heart-warming guerrilla secret Santa movements is going on in the streets of three states right now. People who look like they might need a lift in Charlotte, N.C., Phoenix, St. Louis and Kansas City have the chance of being handed $100 bills by generous teams of anonymous people who are upholding a former millionaire’s Christmas tradition.

“At a suburban Goodwill store on Friday, Theresa Settles selected a large, black comforter to warm her family until she can raise the money to turn the gas heat back on,” Yahoo News said. “A petite woman approached, her face obscured by dark sunglasses and a wrapped winter scarf, and handed Settles two $100 bills stamped with the words ‘secret Santa.’ ‘The only condition,’ she said, ‘is that you do something nice for someone. Pass it on.’”

The guerrilla gifting was started by Larry Stewart of Kansas City who, in his lifetime, gave out about $1.3 million in $100 bills on streets in December.

An action like this could come at no better time. With the credit crisis leaving people financially hurting, in some cases jobless, even homeless, a gesture like this shows the true miracle that lies within the hearts of us all.