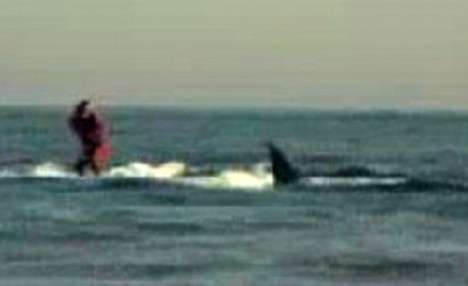 TechnoGadget — January 21, 2009 — Unique
References: dailymail
While inventing perhaps one of the most dangerous extreme sports invented to date, a 25-year-old surfer was pulled along on a surfboard by a fishing line after dragging large pieces of bloodied meat to lure a shark towards him. At first, spectators are skeptical--until a huge dorsal fin suddenly emerges from the deep.

Most of the onlookers are truly flabbergasted after the shark’s massive jaws clamped the meat in fury and started to swim away. However, this does not end the adventure of the daredevil surfer just yet. Holding the fishing rod with his two hands, the surfer reached speeds of about 30 mph as the shark started to go back to the sea.

Unbelievably, the pro surfer still survived to tell the story after he let go of the fishing line after about 30 seconds.

According to Snapper Kem McNair, the one who captured the film from the coast of New Smyrna Beach in Florida, everything was real! He even named “shark riding” as the newest and most risky extreme sports craze.

The shark was soon identified by the marine experts as a Great White shark. This type of shark is common in the temperate east coast of America.

2010 Update: Kem McNair has contacted us to tell us that the film was a hoax.
3.9
Score
Popularity
Activity
Freshness