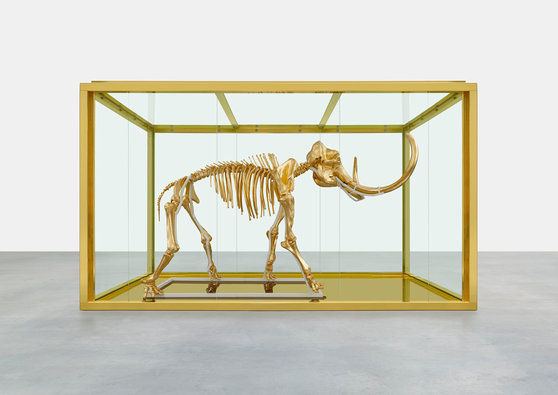 'Gone But Not Forgotten' Consists of a Golden Woolly Mammoth Skeleton

Rahul Kalvapalle — May 20, 2014 — Eco
References: damienhirst & designboom
'Gone But Not Forgotten' is a golden woolly mammoth skeleton fabricated by English artist Damien Hirst. The three-meter tall skeleton is part of Hirst's 'Natural History' series, a long-running series of works inspired by the life forms that make up the earth's natural history.

The woolly mammoth skeleton is encased in a massive steel and glass vitrine. Hirst wanted to address and celebrate the extinct beast's mythical status, and so decided to gild the skeleton and place it in a gigantic gold tank. This depiction plays with the ideas of science, history and mythology that make up human's perception of the woolly mammoth.

Hirst donated the piece to aid the work of amfAR, The Foundation for Aids Research.