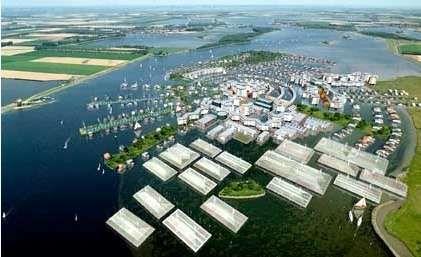 Ayman — February 9, 2008 — Eco
References: npr.org & gizmodo
Share on Facebook Share on Twitter Share on LinkedIn Share on Pinterest
The climate change is already starting to influence architecture and building design. In order to adapt to rising sea levels and the fact that 20% of the country is already below sea level, Holland officials are re-designing the entire country so that it floats on water. City planners near Amsterdam are creating a new suburb with 12,000 houses, 600 of which will be built in water.

The trick? Houses are being built with giant foundations that sit on the bottom of the river. When the river level rises to a flooding state, the house floats up with it. The pipes used are especially designed so to stay connected to electric and sewer lines even with movement.