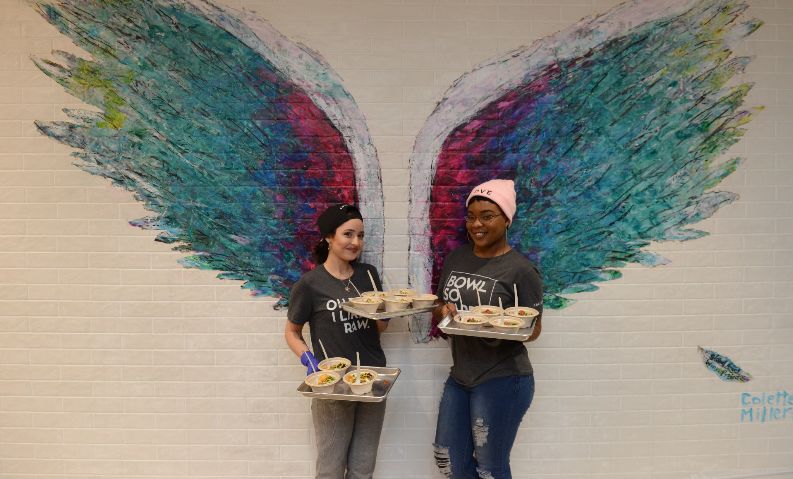 Ellen Smith — February 27, 2018 — Business
References: caliilove & colettemiller
Share on Facebook Share on Twitter Share on LinkedIn Share on Pinterest
The Toronto restaurant chain Calii Love is introducing a new menu and to celebrate, the eatery’s newly opened First Canadian Place location has stamped its outer wall with the famed Angel Wings of Colette Miller - an L.A-based street artist whose dreamy imagery is inspiring an international audience. The Global Angel Wings Project was started by Miller in 2012 when she painted a large pair of wings onto a bleak building in an attempt to remind the city’s inhabitants “that we are all angels of this Earth.” Since then, Miller’s wings have grown into an international phenomenon, with various iterations existing around the world, from Kenya to France. Colette Miller’s painting on Calii Love’s walls marks the first time the artist has designed a piece on Canadian grounds. The commissioned wings hope to embody the spirit of Calii Love, in which people feel inspired, welcomed and nourished from the inside out. Trend Hunter had the opportunity to speak with Colette Miller about her Global Angel Wings project, and how it’s helping to further Calii Love’s messages of inclusion and well-being.

Can you tell me about the Global Angel Wings Project?

The Global Angel Wings project started in 2012 when I had visions about putting wings on the walls - I think at the time I was projecting what I wanted to see on these blank spaces and I just acted on it. At first I did it by myself without a commission but I’ve since been all over the world - Louisiana, Cuba, Malysia, you name it. What the Angel Wings initially represented to me was white light. I was so used to seeing ads that I wanted to see something that enlightened myself. I figured that what we really needed advertised was the essentials, and that’s love.

What role does social media play in what you do?

I didn't have Instagram when I started but it has had a big impact because of the global reach. With its immediacy and the convenience of the phone, everyone can be a photographer. Selfies helped too as people began documenting their lives on the streets. After I set up my first wings, I was amazed at the different people from all walks of life who were posing with them without being prompted. This was back in 2012 when Facebook was really taking off so it was syncricity of the time. Although I don't want it to just be about tagging online, I hope the Global Angel Wings are timeless and live for themselves.

How do you break out of a creative rut?

When I’m grieving or depressed I become more of a poet or a writer. But with painting, I try to leave something in the paint that’s based on a certain love for the piece. It has to reach a certain balance and love before the piece is finished. There’s a certain flow and composition that leads to genuine authenticity, it’s all about putting your own blood on the canvas. It’s about soul and about looking inward as much as it’s about honesty and leaving something when it feels done, and only then. So that’s really what I do, I don’t stop until it’s done, and when it is I walk away.

Is your work ever inspired by other industries?

I would think my images come from more internal meditation. What messes me up in my art is when I start to worry about what other people are thinking. The truth is that none of us can be anything but ourselves. So if you want to do something honestly, no matter what it is - you have to be brave enough to own what you think. Some people might hate it, but that’s not important. So I don’t really go around getting inspiration from other industries, per say.

What are some barriers to innovation that you've experienced?

Sometimes the barrier is time and discipline. You’ll spend all this time thinking about an idea that you never act on. I think that taking action is a big percentage of it. We all have loads of ideas, and most of us don’t act on them. So that’s the biggest barrier, for me and everyone - non-action. Because when it comes down to it it’s really now or never.

If people could take one thing away from your art, what would it be?

If they could just stop and pause for one moment and just reflect on what’s really the most important thing in the world - love. You know, we’re all beat up people and maybe we’re scared or have baggage from our childhood. I think when you really sit still with yourself for one second and just meditate on what really matters, love becomes the most important. I know it’s hard, but you just really have to love what you do, and if people see the love that’s reflected in my work, I’ll be satisfied.

What do you envision for the future of street art?

We’re in a renaissance of international street art. We’re starting to bring it closer to the public eye by incorporating it in different mediums, like advertising. I think in the future people will utilize it to bring new life to bland and depressing spaces. The example I use is strip malls because the space is so mundane and there’s so many ways to bring the art off of the street and into these spaces. This doesn’t just mean in our paintings, but in how we approach it. So I see it influencing humans in daily life more and more.