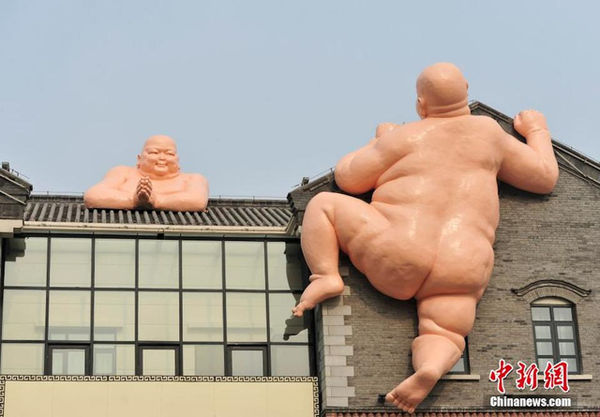 Meghan Young — January 21, 2014 — Art & Design
References: kotaku & neatorama
The religious figure associated with Buddhism can often be depicted in various ways, but the two giant naked Buddhas that are seen scaling the side of a building in Jinan, Shandong province, China, are unlike anything seen before. Although the mysterious art installation can be deemed offensive, it is undeniably entertaining as well. Not to mention extremely well-executed.

The lifelike flesh of the two giant naked Buddhas will have people averting their eyes shyly in no time. According to Eric of Kotaku East, "Online in China, the news media has made allusions to the classic Chinese dish called 'Buddha Jumps Over The Wall'." Other than that speculation, however, the inspiration and mastermind behind the installation remains elusive to the media. That hasn't stopped people from enjoying it, however.
6.4
Score
Popularity
Activity
Freshness