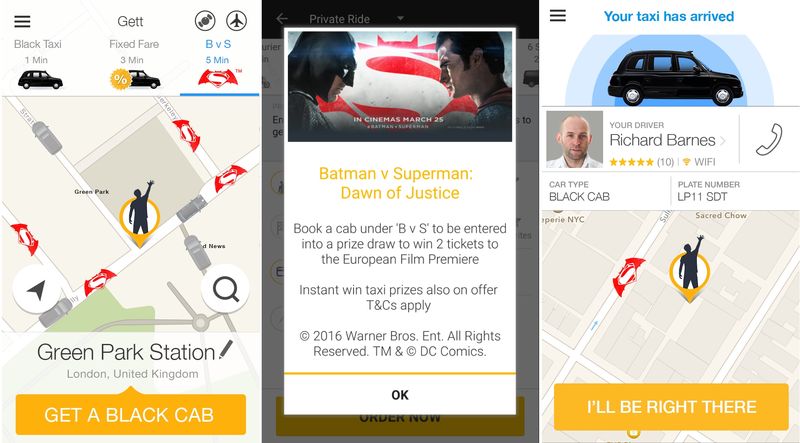 Joey Haar — July 18, 2017 — Business
References: mobilemarketingmagazine
Share on Facebook Share on Twitter Share on LinkedIn Share on Pinterest
The Gett taxi app, a UK-based mobile taxi-ordering service, recently partnered with 'Batman v Superman: Dawn of Justice' to promote the film's London debut. During the promotion, users could track the whereabouts of nearby cabs with both the standard car icon as well as branded Batman v Superman logos, and selecting those promotional vehicles made them eligible for a glitzy reward.

Riding in a Batman v Superman vehicle with the Gett taxi app automatically entered user into a competition to win tickets to the film's London debut. As one of the major cities on any Hollywood movie's international circuit, the London debut was sure to be filled with stars, critics, and paparazzi. Regular black cab trips through London aren't particularly excitement-filled, but the Gett taxi app helped to add some fun with this promotion.
0.6
Score
Popularity
Activity
Freshness
Get the 2021 Trend Report FREE