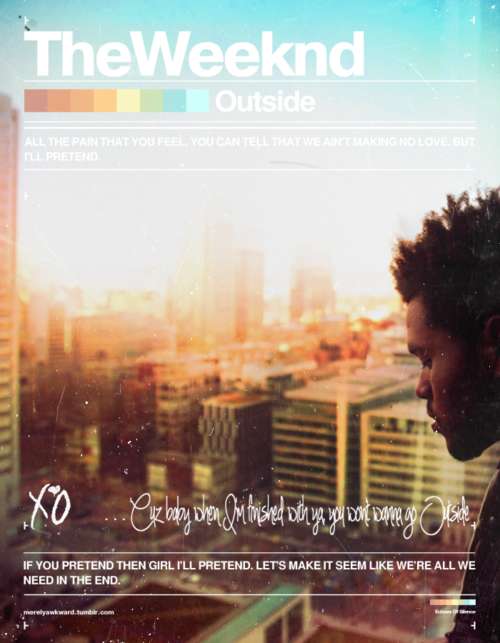 Jason Soy — January 17, 2012 — Pop Culture
References: facebook & merelyawkward.tumblr
Gerard Nelson is the operator and designer behind the popular Merely Awkward Tumblr, and in his latest series of lyrics-inspired photo creations, he pays homage to The Weeknd’s mixtape Echoes of Silence.

He wasn’t satisfied with just slapping The Weeknd’s words onto any run-of-the-mill picture of the emerging Toronto R&B singer the way so many other Tumblr bloggers do. Instead, Gerard Nelson has emulated the signature look of The Weeknd’s mixtape covers, which includes colored swatches, The Weeknd’s name written in Helvetica typeface and the infamous XO Crew logo, and made a tribute cover for each song found on the album. The images are from a photo series The Weeknd’s team released to coincide with Echoes of Silence and Gerard Nelson integrates the best of Abel Tesfaye’s words into each image for a fan tribute that is classy and appealing.
3.6
Score
Popularity
Activity
Freshness