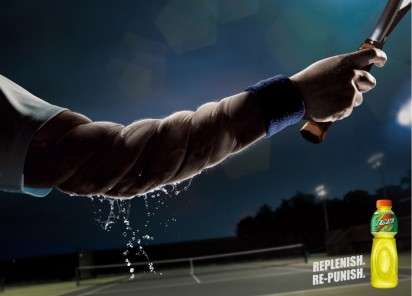 Meghan Young — June 10, 2011 — Lifestyle
References: gatorade & ibelieveinadv
Share on Facebook Share on Twitter Share on LinkedIn Share on Pinterest
The Gatorade Replenish Re-Punish ad campaign really captures the way an athlete can feel midway through a game; exhausted, thirsty and dripping wet from sweat. Sometimes athletes really do wish they could just wring their limbs dry and then refresh themselves with some cool, replenishing liquids.

Conceived and executed by Shanghai-based ad agency DDB, the Gatorade Replenish Re-Punish ad campaign is simple, yet surreal; clever, yet cartoonish. Fun and playful, it will surely resonate with athletes of all ages. To be completely honest, it has actually given me an urge to quench my thirst with Gatorade right now.