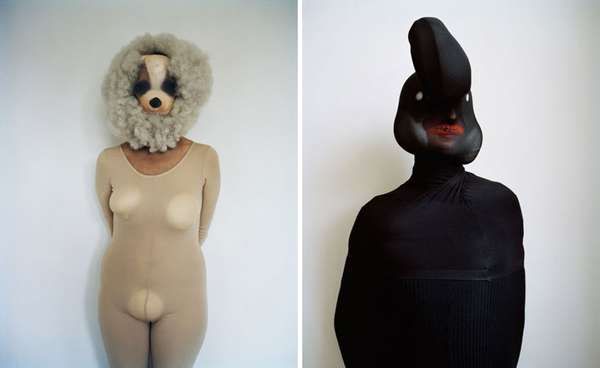 Tracy Wallace — March 20, 2011 — Naughty
References: i-donline & designboom
Share on Facebook Share on Twitter Share on LinkedIn Share on Pinterest
In the recent photography show “Smudge,” Polly Borland, an Australian photographer, shows a series of anonymous models with hidden faces. Some of her subjects' faces are covered with stuffed toy heads, while other looks teeter towards fetish fashion. With stocking-covered faces and simplistically drawn-on features, her work runs the gamut from cute to bizarre.

The series was inspired while photographing a man dressed in a Santa Claus outfit. Borland decided to take his beard and have it cover his entire face. That shot went to exploring with wigs and other small props. Fans of Borland’s work know that the fetish theme isn’t a new one for the artists; ironically, the photographer has also shot such famous icons as England’s Queen to pop sensation Kylie Minogue. From those well-done but staid subjects, she did a series with men who enjoy dressing up as babies after work.

Rubber-Loving Singers
It's No Surprise That Christina Aguilera Loves Latex