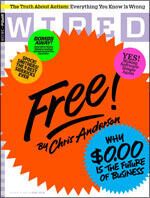 Bianca — February 26, 2008 — Pop Culture
References: wired & wired
Share on Facebook Share on Twitter Share on LinkedIn Share on Pinterest
We've seen magazines get creative in their efforts to save their print editions. As the internet threatens print media, some publications have realized they must give up news stand revenue in order to win over the interest of their readers.

Even Wired Magazine, who has a fantastic blog to supplement their print media, is giving away free copies of the March 2008 edition.

A while back we mentioned Rolling Stone was giving away free magazines, and now Wired has agreed that "$0.00 is the future of business," in the current issue.

"You know this freaky land of free as the Web. A decade and a half into the great online experiment, the last debates over free versus pay online are ending," Chris Anderson wrote for Wired. "In 2007 The New York Times went free; this year, so will much of The Wall Street Journal."

"Once a marketing gimmick, free has emerged as a full-fledged economy. Offering free music proved successful for Radiohead, Trent Reznor of Nine Inch Nails, and a swarm of other bands on MySpace that grasped the audience-building merits of zero."

Also think of free gaming on the web and videos that require nothing more than dodging a few ads with your eye and, "Virtually everything Google does is free to consumers, from Gmail to Picasa to GOOG-411."

If you're a fan of Wired, you'd better head over quick. They're giving out a limited 10,000 copies.

In exchange for the free edition, readers will have to (obviously) give up their mailing addresses, as well as their birthdates. Although you can select places outside of the US, like Canada, the fine print under the form reads, "You must be a legal resident of one of the 50 United States or the District of Columbia and at least 18 years of age as of the date of entry," as well as, "Shipping in the United States only."

Bummer for us Canucks!

79 Things You Can Get For Free
Free Vacations, Free Diamonds and Even Free Cars