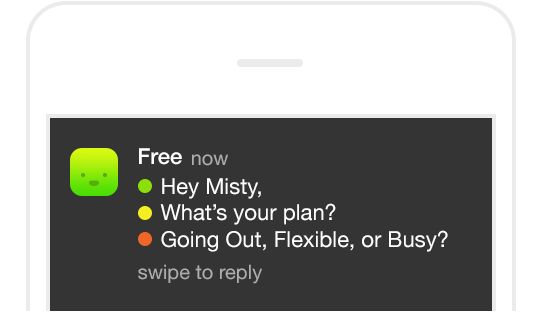 Corinne Guirgis — June 13, 2015 — Tech
References: ffrree & techcrunch
Share on Facebook Share on Twitter Share on LinkedIn Share on Pinterest
While it's often a hastle to figure out Friday night plans with friends, the 'Free' app is stepping in to make socializing a few steps easier. The app will allow you to share your availability at any given time with fellow Free app users who can update their availability in real time by marking themselves as free, flexible or unavailable. The app will also allow those who are free to organize plans in group chats. Rather than focus on where users are, the app focuses on what users want to do, and who they want to do it with.

In the age of social media, people often get stuck in a trance of browsing through their news feeds, fantasizing about other people's social lives and criticizing their lack of one. With the Free app, reaching out to common friends takes the shame out of having no plans on a Friday night and opens the door to social possibilities outside of what one might usually do.

The Free app was co-founded by Path’s Danny Trinh, and has raised almost $2 billion from funds who see the app as a way to fill the emptiness often brought on by other social media outlets, and bridge the gap between online and offline social experiences.
0.7
Score
Popularity
Activity
Freshness
Access Advisory Services