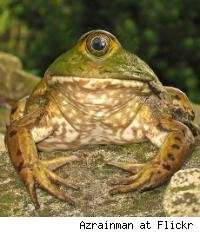 Deformed Amphibians on the Rise

Cecilia Biemann — November 7, 2008 — Eco
References: foxnews
A disturbing trend has seen the rate of amphibians born with deformities in the U.S. increase to an estimated 8 percent.

The odd amphibian deformations have included salamanders and frogs with missing or extra limbs and digits, and other amphibians born so malformed that, sadly, they don't survive.

Biologists are yet to figure out why these malformations are occurring so frequently for certain, but they suspect it could be the result of inbreeding, parasites or pollution.

Implications - Scientists are very concerned with the high rates of amphibian malformation; such malformation could very pose a threat to the survival of certain species. The eco movement can certainly use this as an example of the fragile state of the environment.
4.6
Score
Popularity
Activity
Freshness