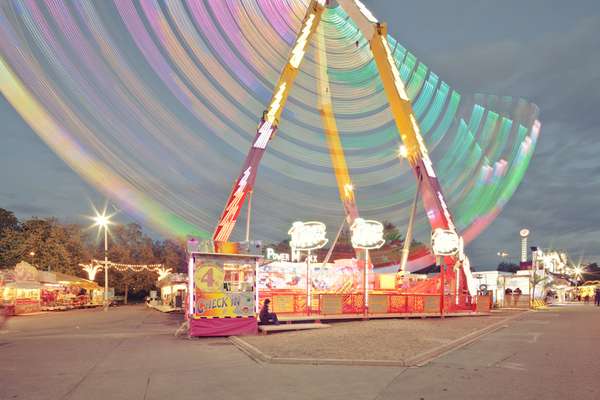 Romina S. Cortellucci — July 1, 2012 — Art & Design
References: franckbohbot & faithistorment
Share on Facebook Share on Twitter Share on LinkedIn Share on Pinterest
The photographs in the Franck Bohbot ‘Day of Celebration’ series are filled with magical wonderment. The captures were shot by the French photographer at the Parisan fair Foire du Trône. As the artist’s website states, Bohbot is interested in “the relationships between individuals and urban environment.” And, this series is no different, Bohot captures the liveliness of a fair amidst the Parisian cityscape.

While, the series is also filled with a sense of nostalgia, since Bohot was inspired to return to the grounds he had once visited often as a child. The playfulness of the bright colors and moving light, bring about the lightheartedness to the series that accompanied spending a day at the carnival. This gaiety is not only embodied in the shots but in the French title of the series, ‘Jour de fête,' that translates to the ‘Day of Celebration.’
3.6
Score
Popularity
Activity
Freshness
Attend Future Festival