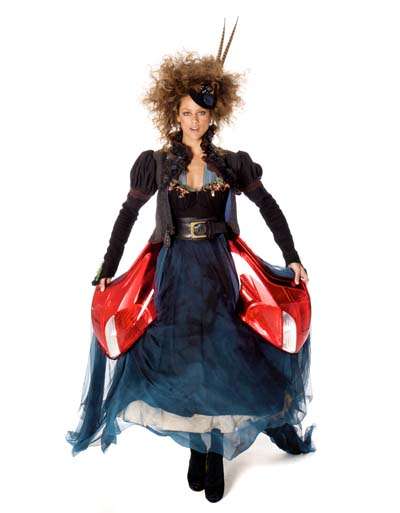 Senduran Bhakthakumaran — January 9, 2012 — Autos
References: ford & earth911
Share on Facebook Share on Twitter Share on LinkedIn Share on Pinterest
An exciting 100 year mark for Ford in Britain has got the company wanting to turn their Ford Focus into a Ford haute couture ensemble, as seen in The Ford 'Trashy' Fashion Show. The car manufacturer has approached Scottish designer of the year nominee Judy Clark to develop a gown using two boxes of car parts, and English jewelry designer Katherine Hawkins to create a necklace using various other auto items. Both designers were not told of the others' challenges.

Judy Clark geared her insights towards a King Edward VIII-style grandeur while maintaining an appreciation for the mechanics of automobile style. Her gown was presented in traditional British colors, and employed a wide variety of parts from the Ford Focus including its keys, taillights and a few well-aimed bursts of aerosol. Hawkins expressed her main challenge was taking apart the larger materials to start figuring out what she could use. Her end result was an extravagant necklace that paid tribute to a mechanical, robot appeal.

Miraculously, both designers produced pieces that were incredibly prominent in The Ford 'Trashy' Fashion Show, and what's more, both masterpieces favored one another perfectly.
3.7
Score
Popularity
Activity
Freshness
Get Trend Hunter Dashboard