Beauty in Support of AIDS 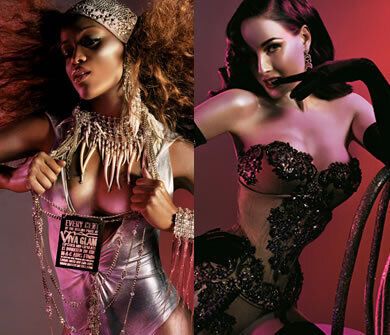 "We remixed my song 'Glamorous' as 'Viva Glamorous'," the singer said. "It's a new house dance remix with new raps and new vocals and harmonies. It works perfectly for the campaign. It's going to be played in MAC stores, too."

Fergie has even designed her own shade of Viva Glam VI Lipglass that will hit shelves in March wherever MAC products are sold.

"I went through about 10 shades before deciding on this one," the Grammy Award nominee said. "It is a pink-tinged mauve that's very soft and will look good on a lot of different skin tones â€” it's the universal easy color to wear."

Aside from offering high quality makeup in the latest colours and products, they use glamorous endorsement to raise awareness for the MAC Aids fund. A portion of the proceeds from certain beauty items goes toward the VIVA GLAM cause. To date, more than 7.1 million lipglosses and lipsticks have been sold to support the initiative.

"I think it's important to realize that half of all new HIV infections each year are in men and women 25 and younger," she added.

"I have been a fan of Viva Glam for a long time â€” I have been following the campaign for years and I think it's a great outreach."

The fund strikes a personal note with her, and it's a cause she feels is worthy of endorsement.

"I have friends that are proud of being careless, that haven't been infected or who have been and aren't bothered by it. I want to educate people."

"MAC picks people like RuPaul, Mary J. Blige â€” people that are a little controversial and aren't afraid to speak their minds," to which she added, "I'm very proud to be a part of it."