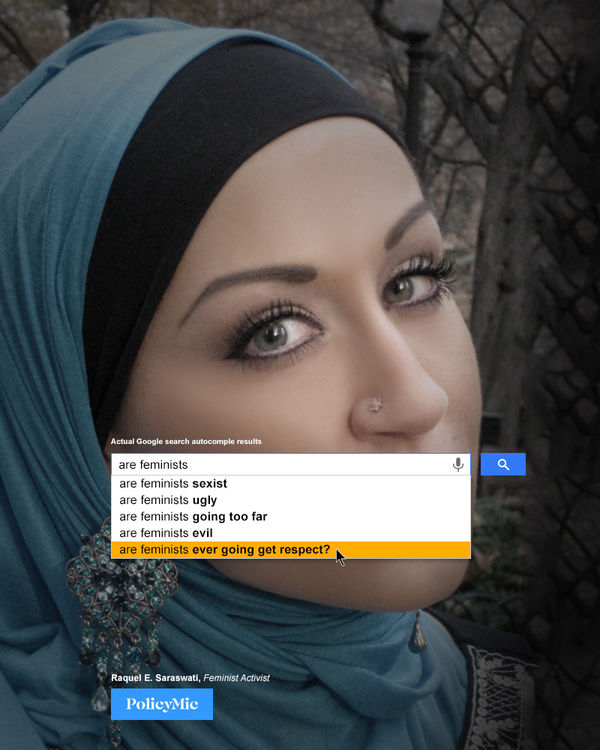 Vasiliki Marapas — November 17, 2013 — Social Good
References: policymic & jezebel
Share on Facebook Share on Twitter Share on LinkedIn Share on Pinterest
PolicyMic’s feminist campaign is an extension of another successful crusade against gender inequality. Earlier this year, UN Women launched a viral ad campaign to highlight the alarming sexist attitudes and behaviors that continue to pervade contemporary society. The campaign featured close-ups of women's faces, with a Google search bar over their mouths, revealing real-life searches and search suggestions that proved to be most offensive.

Now, PolicyMic has adopted the same format for another round of advertisements meant to showcase the perturbing, threatening and hateful social perspectives directed towards women who identify as feminist. The campaign features feminist activists, authors and writers. This time, the phrases typed in the search engine read “are feminists,” “why do feminists,” and “feminists should.” The Search Engine Autocomplete Results are equally as, if not more, vile than the previous campaign, reading: “are feminists evil,” “why do feminists exist,” and “feminist should be shot.”

Fortunately, PolicyMic is able to imagine a world in which this injustice is not tolerated, highlighting more positive phrases like “feminists should live without fear” and “feminists must be heard.”

Affordable Period Underwear
The Thinx for All Collection is Eco-Friendly, Accessible & Inclusive