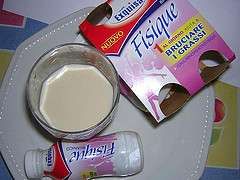 Though the concept of yogurts and milk drinks used as an aide to slimming has been around for a while, the new fermented milk drink from Exquisa Italia claims to be much more than aide to weight-loss. In fact, with its specially formulated Fisique Active Principle; a bland of green tea, calcium, and milk proteins it claims it will help you burn fat naturally.

The Fisique Fermented Milk Drink is itself low in fat and drinking just one a day is said to have visible results. The claims do not stop there either, as the fat-burning milk will also help consumers feel better and healthier.

The multi-functional health and wellness foods and drinks products are set to rapidly expand in 2007 as consumers seek more convenient ways to get rid of excess fat. The stage is set for new ranges of fortified foods and drinks with ingredients which have been shown to activate metabolism such as caffeine, guarana, green tea, ginseng, and the kola nut.

Spaghetti and milk anyone?

N.B. The website is in Italian - use Google translate to get an idea of what is being said!
4
Score
Popularity
Activity
Freshness
View Innovation Webinars