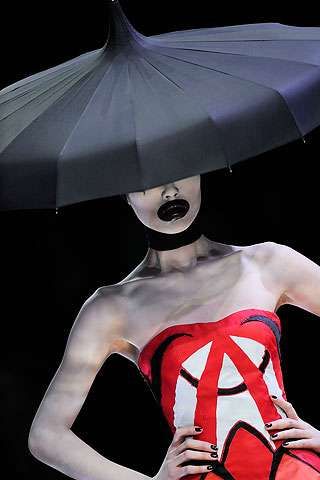 lourdes sanchez bayas — March 12, 2009 — Unique
References: style
Share on Facebook Share on Twitter Share on LinkedIn Share on Pinterest
Some call him a fool for his over-the-top and outlandish catwalks; others hail him as a veritable haute couture genius and fashion visionary for the same reasons. Whatever your opinion of fashion designer Alexander McQueen may be, the fact remains that the man is highly skilled at creating very evocative--and provocative--pieces for his shows that give his audiences plenty to talk about for a long time.

McQueen’s Fall 2009 RTW collection, introduced during Paris Fashion Week, was an spectacle of models strutting up and down the catwalk wearing sex-doll lips and theatrical (but mostly atrocious) attire, chain link masks, very tall platform shoes, and absurd (but highly entertaining) head gear such as umbrellas, lamps, plastic bags filled with garbage, and other kinds of “hats” I could not identify.

Alexander McQueen’s creations never fail to leave a big impression--whether positive or negative--on people. As for me, I always look forward to being entertained by the designer’s weird creations.
5.1
Score
Popularity
Activity
Freshness
Access Advisory Services