Photographers as Their Own Muses

Fashion Photographers Down Under 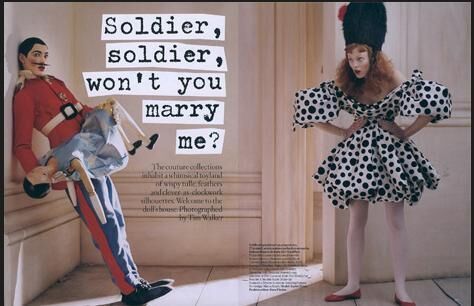 Going Like Sixty — September 27, 2008 — Pop Culture
References: thomastreuhaft
When photographer Tim Walker cribbed the opening line from one of my favorite little folk tunes for a couture fashion shoot, I couldn’t resist.

The British Vogue shoot begins with the folk song's opening line: "Soldier, soldier, won't you marry me?" The light and color combine for a quirky, playful series of photos.

Implications - The realms of fashion and music have always existed hand in hand, with this photo shoot serving as a great example. Since the 1950s, musicians have served as more than minstrels; they are pop cultural icons whose clothing, hairstyles and attitudes are duplicated by many. Thus, the influence music has on fashion, which is a combination that companies looking to hit the youth demographic should inspect.
4.1
Score
Popularity
Activity
Freshness