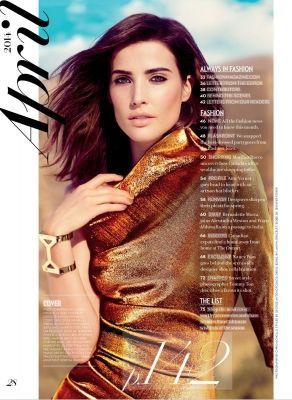 Meghan Young — March 21, 2014 — Fashion
References: fashionmagazine & fashiongonerogue
Share on Facebook Share on Twitter Share on LinkedIn Share on Pinterest
The Fashion Magazine April 2014 cover shoot shows a glamorous side of Canadian actress Cobie Smulders, which not many fans would be used to considering her character in 'How I Met Your Mother' is pretty down to earth. This is surprising considering she plays a newscaster. Yet with her statuesque figure, which she recently worked on hard for the upcoming 'Captain America: Winter Soldier' movie, she could easily have enjoyed a career as a model.

Bowling-Inspired Retro Streetwear
END. and BAPE are the Latest to Join Forces on a Capsule