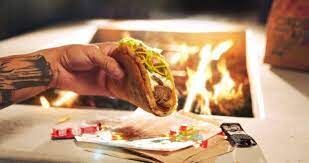 For those unfamiliar, the Quesalupa is a cross between two signature Mexican dishes: a quesadilla and a chalupa. The hybrid dish is primarily known for its “famously crispy” chalupa shell, which is stuffed with a blend of melted pepper jack and mozzarella cheeses. Now, the hybrid snack food is being crossed with yet another dish: fajitas. The new Fajita Quesalupa consists of your choice of Steak or Grilled Chicken, plus shredded cheddar cheese, lettuce, diced, tomatoes, and a creamy poblano chili pepper sauce, all served inside a roasted bell pepper and cheese stuffed shell.

As of right now, the Fajita Quesalupa only appears to be available from select locations.