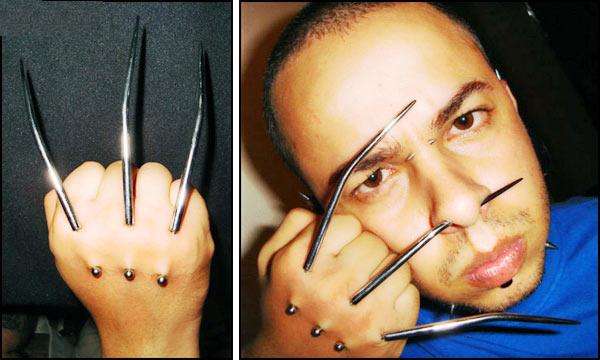 When Rebellion Goes WAY Too Far

Cowbag — September 2, 2008 — Art & Design
References: ebaumsworld
Bod mod can be a bit urgh (shiver down spine), except the elf ears which I would considering having done. Just a heads up, this is a very gory image gallery, so don't say I did not warn you!

These suspects have gone way too far in the field of body modification. If there is a line that should not be crossed, then these people have crossed it and sprinted off into the distance!

I guess it all comes down to the peacock theory; some people like to strut about being different and drawing attention to themselves. Of course there, are lots of Suicide Girls in here too, and I think they rule.


Knives Through Nose - I am assuming these were just there for the effect in the picture, and if so, then you could do this with chop sticks, pencils, lip stick or even vibrators.

Knuckle Duster Chest - Extreme and questionable... I don't get the message they are trying to portray here. Can anyone help me out?

Knife Hands - Oh for God's sake. Talk about just doing it for attention. How is he supposed to erm 'sort himself out' with these prongs in his hands?

Star Head - Looking at the picture, this guy looks like he had a seriously retreating hairline, so he shaved it all off and stuck stars under his skin instead. Rock & roll.

Split Tongue - Does this offer double the fun? Hmmmm one to research I guess.

Bird in Ear - Freak, freak, freak. If this chick is alive, then it is cruel. If it is stuffed, then it is even more worrying. What would want to make you do this?

Alien Face - He looks a bit like a goat, human, and unicorn hybrid or a centaur from Harry Potter. Either way, I don't think he was after any of these three looks! He would have been a bit of a hottie (maybe) if he had not done this to his face.

Barrel in Mouth - This dude has GOT to be mentally ill - or have body dysmorphic disorder.

Body Corset - This is quite popular apparently. Presuming if you have this done, it is for life. What I really want to know is if you can loosen the corset if you put some weight on.