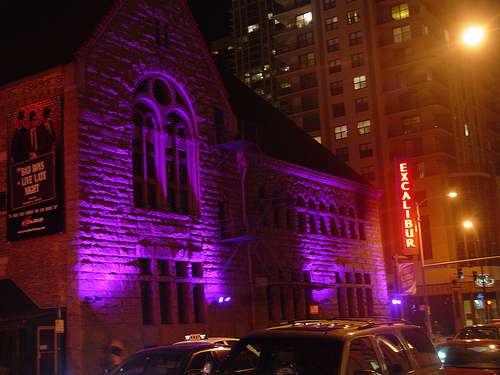 Katherinev123 — October 12, 2010 — World
References: associatedcontent & chibarproject
Share on Facebook Share on Twitter Share on LinkedIn Share on Pinterest
(SPONSORED) Hold onto your glass at Excalibur Nightclub—its resident spirits just might break it without warning. This museum turned party space has been called one of the most haunted places in Chicago, where party-goers might expect to see glasses and bottles breaking on their own or hear screams coming from the lower level bathrooms, even when they’re unoccupied.

Excalibur Nightclub comprises multiple nightclubs ranging in entertainment and theme, and is located in a gigantic castle-like structure, one of the city’s historical landmarks. Originally home to the Chicago Historical Society, it once served as a temporary morgue after the Eastland Disaster of 1915. Some attribute the haunting to this, while others believe the ghosts are those who perished during the Great Chicago Fire of 1871.

Supernatural occurrences definitely make for an unforgettable night on the town, especially with Halloween right around the corner.

This content series is brought to you by the All-New 2011 Kia Sportage. Welcome to the Next Level.