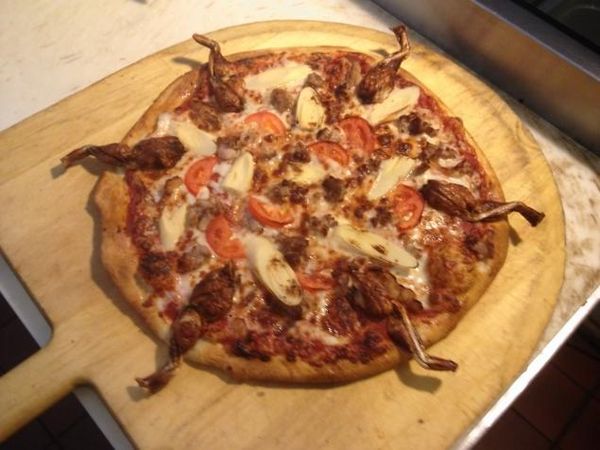 The Everglades Pie is Topped with Animals Found in Florida's Swamps

Michael Hines — January 15, 2014 — Lifestyle
References: nydailynews & thatsnerdalicious
Those who consider themselves adventurous eaters will want to put the Everglades Pie on their to-eat list. This uniquely Floridian pizza is topped with meat you normally wouldn't find outside of a swamp. The pizza includes frog legs, python meat, hog and alligator meat. Some pizzas may include one or two of those ingredients, but finding python meat on any menu seems like a bit of a stretch.

The Everglades Pie was concocted by Evan's Neighborhood Pizza in Fort Myers, Florida. According to owner Evan Daniell, about 150 Everglades Pies have been sold since the pizza debuted two years ago. The pizza is priced at $45 for a 14-inch medium, with the high price due in part to the fact that python meat sells for $66 a pound.
4.6
Score
Popularity
Activity
Freshness