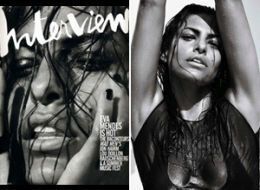 The cover and glamorous editorial spread, which were styled by fashion editor Karl Templer, look almost like a fashion or perfume ad. The photography is by Mikael Jansson.

"I'm not angry," says Mendes in the interview, "But because celebrities' lives are so visible, I think it makes it look lighter than it is. I have a really good sense of humor, I'm just very sensitive. The other day I was reading an article. I don't even remember who the actress was, but she's been around for a long time. She said something like, 'I'm proud that I've had a whole career without making it to rehab."

I thought, That's such a negative twist on it. I'm proud of people who have the determination and the fearlessness to actually go and face their demons and get better. This is a life or death situation. Again, I'm not a spokesperson for this, but it's just that I want to support people for their decisions when they do go in and get help."

Mendes stars in two upcoming movies: The Women (September) and The Spirit (Christmas).

Pick up the August issue on July 15, and see the previous issue of Interview magazine below: