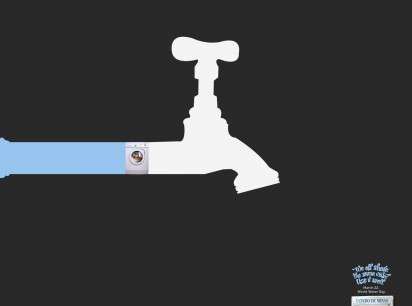 Meghan Young — April 3, 2013 — Marketing
References: filadelfiacom.br & ibelieveinadv
Share on Facebook Share on Twitter Share on LinkedIn Share on Pinterest
The Estado de Minas Newspaper ad campaign revolves around the silhouettes of common water issuers such as a faucet and shower head. These minimalist illustrations communicate a blockage of sorts. In place of globs of hair and residue buildups is a washing machine, lifesaver and inflatable pool. It reads, “We all share the same water. Use it well." Together, it encourages people to be more responsible when it comes to water, especially on World Water Day.

Conceived and executed by Filadelfia Comunicação, an ad agency based in Brazil, the Estado de Minas Newspaper ad campaign was art directed by Lucas Queiroz and Márcio Doti with creative direction by Dan Zecchinelli. A simple campaign that tackles a challenging problem, the creators opted to rely on people's own interpretations to better drive home the message.
3.8
Score
Popularity
Activity
Freshness
View Innovation Webinars