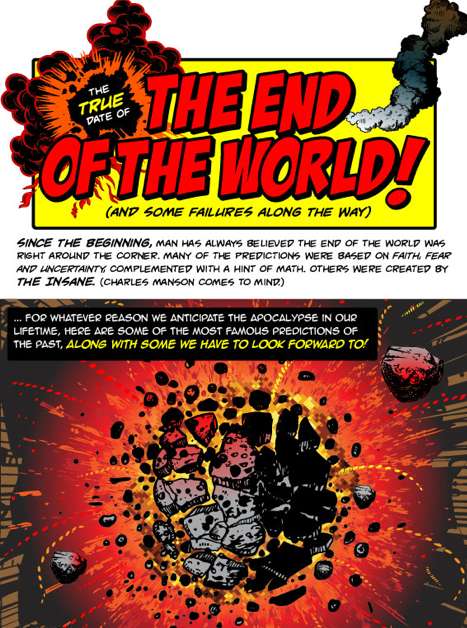 'The End of the World' Infographic Forecasts the Earth's Fate

Marie C. Hudson — February 21, 2012 — Art & Design
References: infographicjournal
Share on Facebook Share on Twitter Share on LinkedIn Share on Pinterest
Nobody can be sure if December 21, 2012 will mark the end of human existence, as the Mayan calendar seems to indicate, but seeing as it's nearly ten months until the potential apocalypse, now seems like a great time to check out MyFreeEmailSearch.com's 'The End of the World' infographic.

Highlighting some of the best and most bogus predictions of the past and some favorite future predictions, the illustrated chart reads like a comic book of possible apocalyptic scenarios. From failed predictions by Charles Manson and Christopher Columbus, to future claims by Nostradamus and even NASA, the infographic shows that planning for the end of the world isn't just for the highly superstitious.

Whether you believe what the Mayan calendar has to say, or you're planning on living to see the end date of the universe, 'The End of the World' infographic is full of fun facts and superstitions worth checking out.
1.7
Score
Popularity
Activity
Freshness
Get Trend Hunter Dashboard