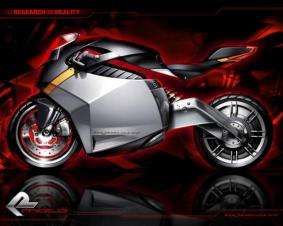 Jeremy Gutsche — August 11, 2006 — Autos
References: rmoto & gizmag
Share on Facebook Share on Twitter Share on LinkedIn Share on Pinterest
In July, we introduced you to the ultra hot Tesla Electric Supercar/, which can rocket from 0-60 in just 3 seconds. With that kind of performance from a car, electric superbikes are inevitable. After some research on the net, it appears that the rMoto electric superbike leads the pack. It's still in prototype stage, but the rMoto website is worth the visit!

Implications - Many new vehicles using alternative fuel sources are beginning to surface with the advent of the world initiative to be more environmentally conscious. One consistent problem these vehicles face however is that many of them are aesthetically unpleasing, making it harder for the general population to readily adapt them. Corporations introducing new concepts to the public need to factor in aesthetics if their ideas are to go viral.
6.9
Score
Popularity
Activity
Freshness
Get the 2021 Trend Report FREE