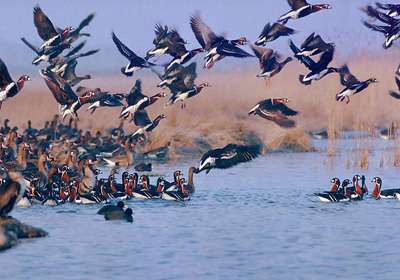 These journalists and web writers are hoping they can increase awareness by offering media exposure to the endangered nature that the Iranian government has neglected to preserve.

The wetlands in danger, the Hamoon Wetlands, also include the smaller regions of Saberi, Hamoon-Poozak and portions of Hamoon-Heermand.

"Green bloggers have published posts and photos to attract attention to the birds in danger," digiactive.org says. "They are encouraging other bloggers to write at least one post about the wetlands between July 5 - 10."

One blogger, Mohmmad Darvish, wrote in Persian, "That the loss of wetland means the extinction of 52 percent of fish, 31 percent of birds and 13 percent mammals:next generations probably never forgive us if we destroy wetlands."

While it doesn't look like their publicity efforts went far at the beginning of this month, as more media, including Trend Hunter, picks up on the story, their initiative may make a difference after all.
1.8
Score
Popularity
Activity
Freshness
Attend Future Festival Virtual

50 Innovations for the Greater Good
Including Activism, Inventions, Discoveries and Art