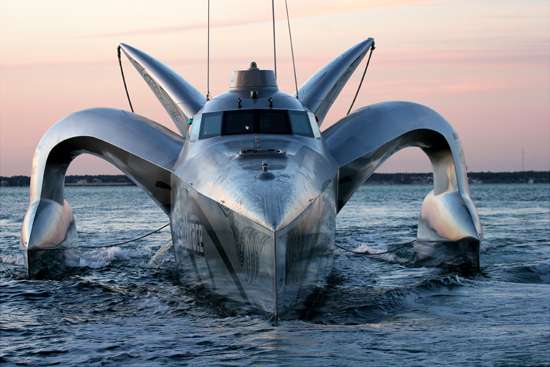 The inventors of the zero carbon boat intend of breaking the current global speed record, planning to take the boat around the world running purely on fat. It was invented by an enlightened former oil industry engineer from New Zealand who is also an environmentalist. He hopes the project will promote environmental awareness and highlight the fascinating potentials of sustainable resources.

Pete Bethune and two crew members underwent liposuction, gathering a total of 2.5 gallons of excess blubber to power the speed boat. Their fat alone was enough to produce 2 gallons of fuel. He put the lard in motor and says under optimal conditions, the boat could run a successful 9 miles.

This boat is built for speed. While most boats ride over waves in rough seas, the Earth Race boat is built to pierce right through them. He plans on taking a 27,600-mile journey across the world, making the entire journey on 100% biodiesel.

If inventors could find a way to use global muffin tops, saddle bags and beer bellies as energy, these could be revolutionary.

One things for sure -- in today's society, human fat is definatley a renewable resource. So long as the obesity epidemic persists, fueled by pop culture phenomenons like McDonalds, it looks like there will be plenty of fuel to burn.

With that much fat, could the Earth Race be unsinkable too?
5.8
Score
Popularity
Activity
Freshness
Attend Future Festival