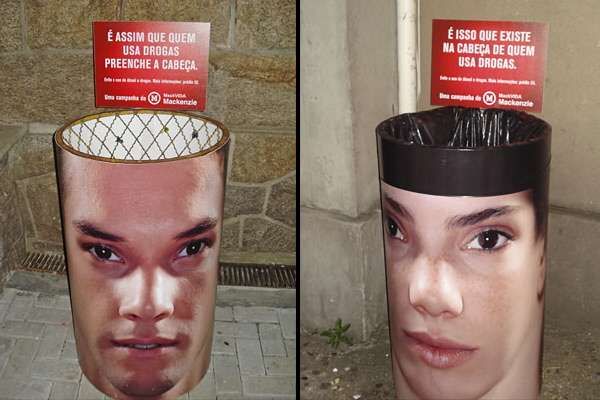 Wessley Murylo — March 13, 2008 — Eco
References: brazilinhotpants.blogspot & g1.globo
Share on Facebook Share on Twitter Share on LinkedIn Share on Pinterest
This is a controversial campaign against drug use and abuse of alcohol. It can be seen in the corridors and recreation areas of the Mackenzie Presbyterian University in SÃ£o Paulo/Brazil. It was implemented immediately at the beginning of the new school year raised many a reaction from the students. From morbid, gross, to good, they give you stuff to think and discuss about.

The design of the campaign is from the hand of Publicis, a company which takes care of all the public relations activities of the university. According to the vice-president of the bureau, Guilherme Jahara, it was intentional to be controversial. â€œAs drugs have a strong impact, the propaganda about this issue should have a similar impact. I used this argument to sell the campaign," Jahara says.

By the way, the photographed faces are not students, but professional models hired by the promotion bureau. Publicis has plans to implement more of these attention requiring controversial objects on the university grounds.