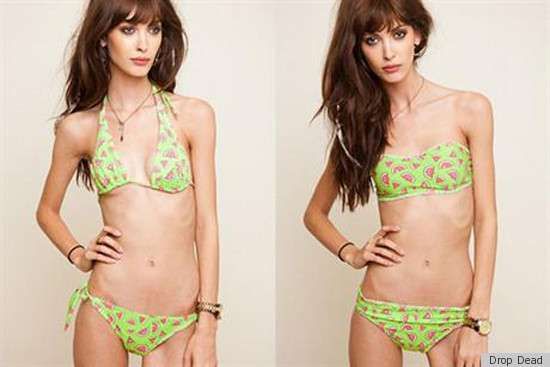 Katherinev123 — November 11, 2011 — Social Good
References: huffingtonpost & thegloss
Share on Facebook Share on Twitter Share on LinkedIn Share on Pinterest
Do you think the model in these Drop Dead ads is too skinny? UK Watchdog group the Advertising Standards Authority (ASA) thinks so. On the heels of banning Marc Jacobs' 'Oh, Lola!' fragrance ad with Dakota Fanning (the group didn't like the provocative placement of the perfume bottle between her legs), it has also banned these ads by the British clothing brand Drop Dead.

In the Drop Dead ads, the very-skinny model's ribs are very visible, not to mention her hip, collar and thigh bones as well. The ASA concluded the Drop Dead ads are "socially irresponsible," saying that the extreme thinness of the model would negatively impress upon the young audience most likely to wear Drop Dead's fashions.

It just goes to show that with society's new appreciation for more natural-looking models and campaigns for "real beauty," such as those championed by the soap brand Dove, ads like this just won't fly. What do you think?
4.1
Score
Popularity
Activity
Freshness
Jeremy Gutsche Keynote Speaker