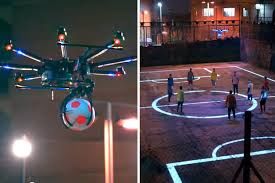 This Pepsi Max Campaign Transformed a Game of Street Football

For this particular chapter of the Genius campaign, the football players saw their game of kickabout interrupted by a drone descending from the sky and dropping a ball into their midst. 30,000 reactive LED lights were then used to draw field lines, goalposts, a humongous scoreboards and applauding fans, all projected onto surrounding buildings.

Put together by the BBDO ad agency, the experience was produced in real-time, with both players and bystanders taken by genuine surprise.