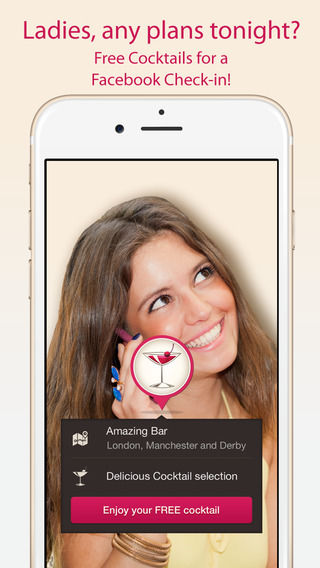 Laura McQuarrie — March 25, 2015 — Lifestyle
References: itunes.apple & thespiritsbusiness
Share on Facebook Share on Twitter Share on LinkedIn Share on Pinterest
Ladies' night has long been a tactic used to lure women into bars, but Drinki appifies this concept for the mobile generation. Essentially, the women-only app is designed to work with participating bars, so that with a Facebook check-in, a lady is entitled to a free drink upon arrival.

Drinki is now set up in the UK and works with establishments like Buddha Bar, JuJu, Lola Lo, and Holborn Grind. Drinki is a smart way to target women, who are most likely in large groups and sharing what they're doing on social media.

Although Drinki was launched first to attract women to bars and soon, Drinko will be launched as an app to entice men with the same offer. These two apps will work side-by-side and cover a broader range of bars in the UK.
4.6
Score
Popularity
Activity
Freshness
View Innovation Webinars