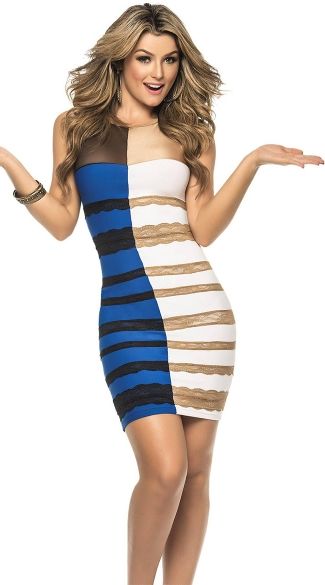 This 'The Dress' Halloween Costume Revives a Viral Debate

The incident was called 'Dressgate' in the media, and it centered around an innocently posted picture of a girl in a formal dress. The lighting on the shimmery, lace-covered body con dress made it impossible to tell whether it was a blue and black or a white and gold dress. Some people thought blue, some white. Almost everyone was entirely certain that they were right, and willing to fight passionately to prove it. But no matter which side of the argument you fell on, it was impossible to be a person with even one social media account and not be aware of the raging debate.

This The Dress Halloween costume is a simple and recognizable way to dress up as one of this year's biggest Internet culture moments.
6.6
Score
Popularity
Activity
Freshness