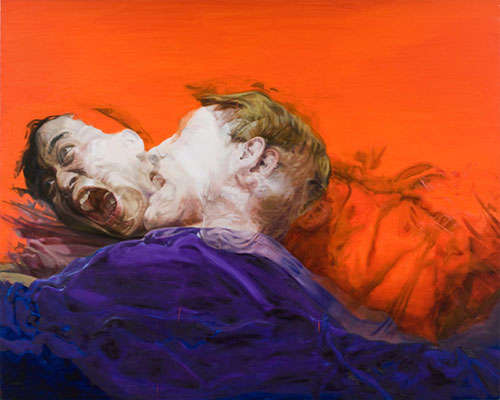 — June 5, 2013 — Art & Design
References: hifructose & booooooom
Share on Facebook Share on Twitter Share on LinkedIn Share on Pinterest
Korean artist Kyung Sunghyun has outdone himself with his dream-like portrait series featuring several blurred and fantastically morphed figures. Each of his paintings mimics overexposed photography. Figures are blurred and appear as if they're in the process of moving. Instead of using photography, however, Sunghyun captures the same effect using paints.

One of the most striking pieces in the series is a close-up of a face, its mouth gaping open in the middle of a scream. Combined with the blurred effect, this painting becomes chillingly suggestive of a mental or nervous breakdown. Each piece has such an intensity, almost an aggression, that viewers cannot help but feel nervous when looking through Sunghyun's series.

By mimicking a photo effect using fine arts, Sunghyun has shown that even with an advancement in technology, painting and other arts can keep up and produce a similar if not better effect. These dream-like portraits, even though they were not captured with a camera, are so emotional and personal that they are impossible to forget.
6
Score
Popularity
Activity
Freshness
View Innovation Webinars