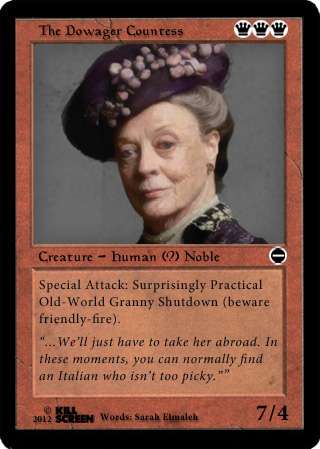 Rebecca Byers — March 3, 2012 — Pop Culture
References: news.killscreendaily & buzzfeed
Share on Facebook Share on Twitter Share on LinkedIn Share on Pinterest
After much success in England and North America, the Downton Abbey memes have begun to make their way onto the Internet. The early 20th century period drama follows the lives on an estate in Yorkshire, England around the time of WWI. KillScreenDaily.com has created a hilarious set of Downton Abbey-inspired cards in the spirit of the ever-popular RPG card game Magic: The Gathering.

The cards take the best of the Edwardian-set telenovela and have fun delegating the powers and qualities of the characters. Everyone's favorite character, the cold-tongued Dowager Countess, for example, has a special attack of "surprisingly practical old-world granny shutdown," while Mr. Bates is armed with the special ability of "self-sacrifice."