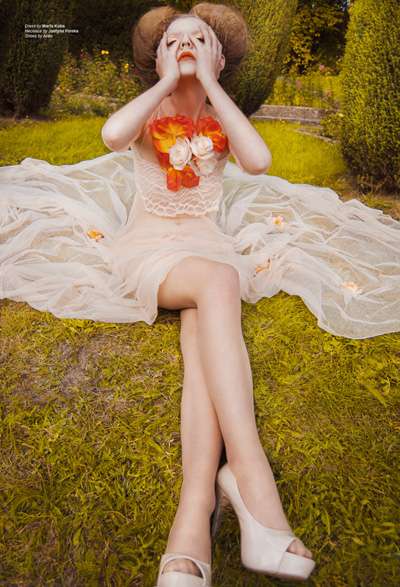 Jana Pijak — April 26, 2012 — Fashion
References: designscene.net
The ‘Down the Rabbit Hole’ Mode&Styl shoot is an artful fashion story that fuses fashion with a magical sense of story-telling. Exuding whimsy, fun and a childlike innocence, the shoot pays tribute to a children’s icon who has been adapted numerous times over in fashion.

Attributing Alice in Wonderland, models Dobrawa and Anna play dress-up and unleash their inner sense of imagination. Featured in the magazine’s Spring 2012 issue, this striking shoot takes place in a whimsical garden setting, tying into the setting of the tea party in the original novel.

Models Dobrawa Zowislo and Anna Zawada are photographed by Mirella Szymoniak, who creates an imaginative fairytale world. Sporting doll-like hair and makeup by Lena Zieba, the girls are styled in a sea of flowing and feminine frocks that are at once sophisticated and girly.