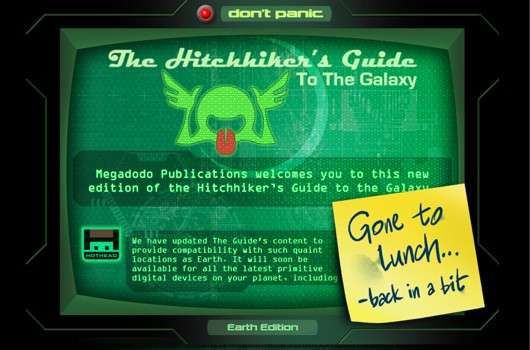 According to the press release, “The Hitchhiker’s Guide to the Galaxy app is an authentic experience, allowing fans to feel like they’re holding the device that Douglas Adams described over thirty years ago.”

The app will aim to emulate the content and feeling of the actual Guide itself, rather than serving as compendium for the 1978 radio show, 1981 TV series, or 2005 film. Users can expect to find entries for towels, Milliways, Vogons, Babel Fish, Pan Galactic Gargle Blaster and How to Survive in Space.

Hothead’s holding page features a voiceover by Simon Jones, who played Arthur Dent in the 1981 BBC TV series, indicating that the app’s encyclopedic entries might be narrated by his dulcet, smooth tones.

Since the application will only be available for iOS, Android users may have to turn to Douglas Adams’s original 1979 novel for directions on how to get to the Restaurant at the End of the Universe.
1.4
Score
Popularity
Activity
Freshness
View Innovation Webinars