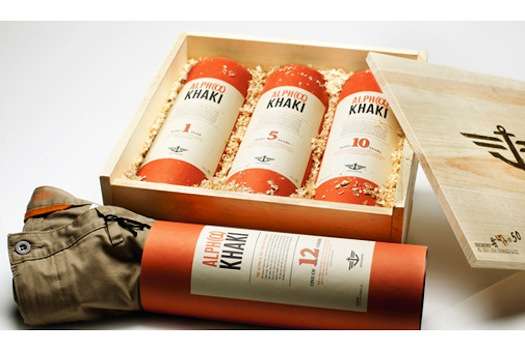 Katherine Vong — December 14, 2011 — Fashion
References: hypebeast & psfk
After collecting sizing information from its online customer database, the Levi's-owned clothing brand Dockers sent 600 of its customers a set of its popular Dockers Alpha Khakis, which were packaged in what looked like whiskey bottles.

The Dockers Alpha Khakis whiskey bottle sets are limited edition -- only 50 crates have been made. As for the marrying of whiskey and pants, it comes down to the types of finishes in the Alpha Khakis collection. According to PSFK, the whiskey bottle packaging was inspired by three types of khaki finishes: scraped, dirty and destroyed. In addition, the whiskey bottle as a theme for packaging allowed the company to emphasize the masculinity behind the brand's 'Wear the Pants' campaign.
2.8
Score
Popularity
Activity
Freshness