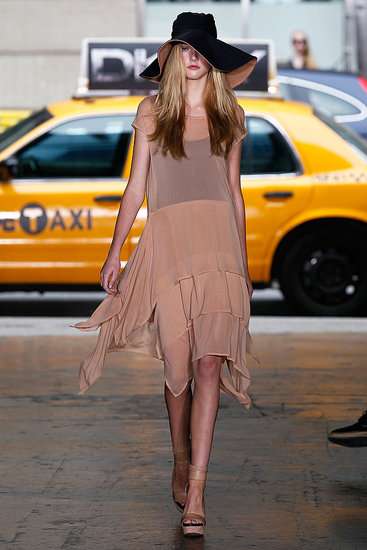 The DKNY Spring 2012 Collection Celebrates the City That Never Sleeps

Souzan Michael — September 12, 2011 — Art & Design
References: fashionologie & style
Donna Karan's devotion and celebration of New York City can only be compared with Carrie Bradshaw's love of the Big Apple in Sex and the City and the DKNY Spring 2012 collection depicted that urban patriotism perfectly.

Set against a backdrop of a New York City yellow cab and falling on the tenth anniversary of September 11th, the DKNY Spring 2012 collection was classic in typical Donna Karan fashion, with a bit of a nostalgic and tragic feel, in accordance with the general feel of the city on September 11th.

Big, floppy hats adorned the heads of the models, and easy-breezy skirts and dresses were the highlights of the collection. These practical yet trendy styles are characteristic of DKNY fashion and are what make Donna Karan one of the most celebrated designers of our time.

The DKNY Spring 2012 collection is not unexpected or shocking, but it is perfectly wearable and a great reminder of what Donna Karan is capable of.
3.5
Score
Popularity
Activity
Freshness