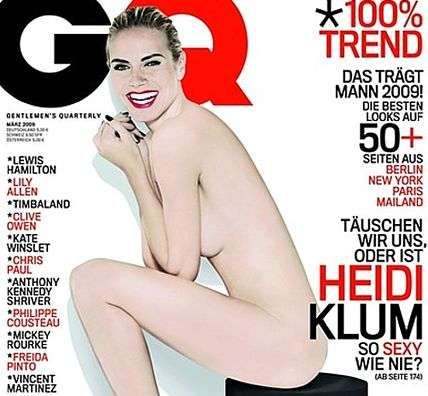 lourdes sanchez bayas — February 12, 2009 — Naughty
References: justjared.buzznet & egotastic
Share on Facebook Share on Twitter Share on LinkedIn Share on Pinterest
Here at Trend Hunter, we have seen our share of photoshopped celebrities on fashion magazines; in fact, I remember that Madonna photo bomb disaster where the pop diva’s face received a very unflattering and messy makeover. The point behind all that drivel is that this March 2009 GQ Germany issue featuring supermodel Heidi Klum posing in her birthday suit is so bizarre and incredibly phony that it’s hard to believe this awful digitally manipulated mess made it to the public stands without a riot ensuing among the magazine’s subscribers asking for their money back.

We all know it has become standard procedure for magazines to resort to digital enhancements, which usually meet with varying degrees of success. However, the publication of such shoddy and poorly-executed work does both Heidi Klum and GQ a disservice.