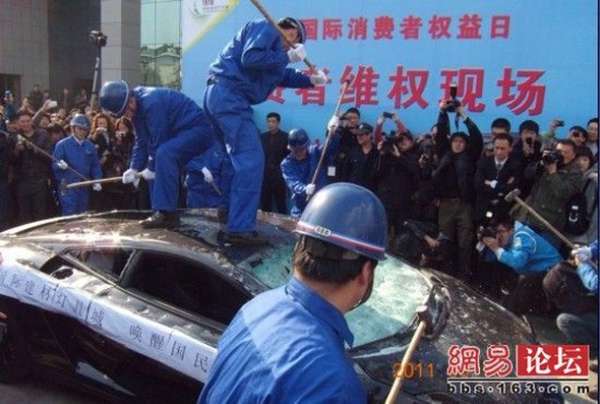 Michael Hines — March 16, 2011 — Autos
References: chinacartimes & autoblog
Share on Facebook Share on Twitter Share on LinkedIn Share on Pinterest
A Chinese man angered over the lack of support he was getting from Lamborghini over maintenance issues has publicly destroyed his Lamborghini Gallardo in protest. The man from Qingdao, China purchased the Gallardo a mere six months ago, and in that time the car is said to have suffered numerous mechanical issues. The final straw came when the car wouldn't start and had to be towed. Upon arriving at the shop, the man found that his car had been damaged in transit and still wouldn't start.

The man ultimately destroyed his Lamborghini Gallardo in public after attempting to reach out to Lamborghini CEO Stephan Winkelmann for help. When no help was given, the man decided to go at his car--valued at $529,000 and $757,000 in China--with sledgehammers. I have to say that I love this man's choice. Lamborghini does need to treat its Asian buyers better as they are becoming a bigger part of the luxury and supercar owners market.
5.2
Score
Popularity
Activity
Freshness
Attend Future Festival Virtual