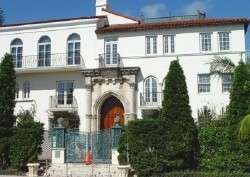 Marissa Brassfield — September 2, 2008 — Luxury
References: casacasuarina & luxist
Share on Facebook Share on Twitter Share on LinkedIn Share on Pinterest
For years after Gianni Versace’s death, Casa Casurina, the demigod fashion designer’s Miami estate, has served as a private hotel club. The house is being opened for the first time to the public for $50 tours three times daily for the month of September.

Versace bought Casa Casurina in 1992 for a scant $2.9 million, then infused it with his legendary style. The 1930s home features architecture based on Alcazar de Colon, a 16th century home in Santo Domingo that was built by the son of Christopher Columbus.

Among the home’s quirkier accents are a guest room that was designed especially for Madonna, a 12-person shower, a marble toilet and an observatory that overlooks Miami Beach. Casa Casurina was the home in which Versace was killed in 1997. Tours of the home are given by a Versace-clad guide.
2.3
Score
Popularity
Activity
Freshness
Attend Future Festival Virtual