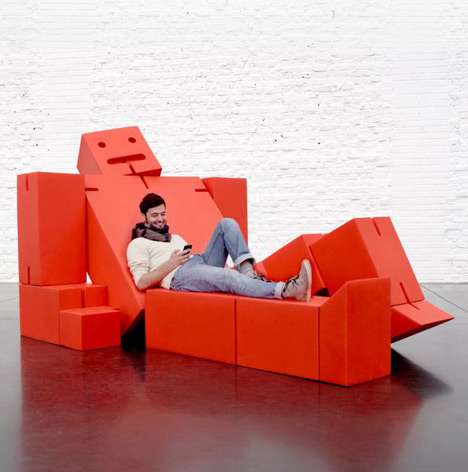 The David Weeks Cubebot Couch is a Lifesize Action-Figure

Josh Triantafilou — April 15, 2012 — Art & Design
References: davidweeksstudio & dezeen
Designer David Weeks has joined forces with the Belgian firm Quinze and Milan to unveil an over-sized furniture version of Weeks' Cubebot Toys. Their creation will represent Areaware in Milan this month at the design festival MOST.

Angular, block-like robots may not be many people's idea of comfortable furniture, but this Cubebot-inspired sofa was never intended to be a common chesterfield. It is as much a sculpture as it is furniture. In fact, it could be used on a movie set as a prop or backdrop if needed. Still, the couch is big enough that a grown man can comfortably lie on it. Moving may be a bit of trouble though.

Most apartments and houses are not made to accommodate large, eccentric, conceptual designs. A smaller version of this Cubebot couch would be a nice addition to the homestead.