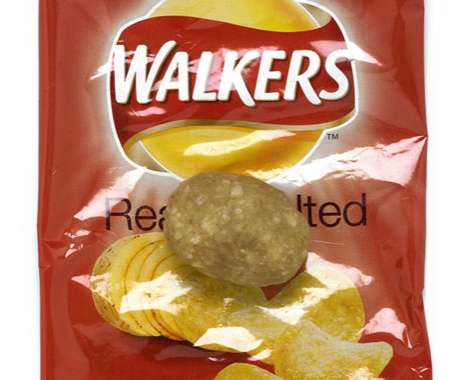 The Daniel Eatock â€˜Processed Potatoesâ€™ Pieces are Less than Appetizing

Marie C. Hudson — September 15, 2011 — Lifestyle
References: eatock & booooooom
Share on Facebook Share on Twitter Share on LinkedIn Share on Pinterest
If you’re about to indulge in a snack of your favorite potato chips, you might want to finish before looking at the Daniel Eatock ‘Processed Potatoes’ photos. The London-based mixed media concept artist and photographer created the two pieces by chewing an entire bag of crisps, then using the spat-out blend of mushy, fried potato to form the shape of an actual spud. The end result is extremely realistic, with the spewed crisp creation passing as an untouched potato, at least in the photograph.

Eatock doesn’t make it clear whether his artwork is a criticism of Walker’s (the UK counterpart to Lay’s) and Kettle Chips, or a tribute, leaving it up to the audience to decide. As a snack lover myself, I have mixed feelings about the piece, as I’m impressed by the concept, but feeling slightly iffy about jumping in to my next chip snack attack. However, no matter what interpretation, the Daniel Eatock Processed Potatoes project is an awesome work of pop art.
3
Score
Popularity
Activity
Freshness
Get Trend Hunter Dashboard