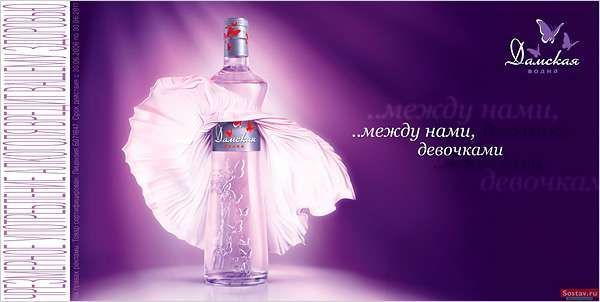 Bianca — April 1, 2008 — Lifestyle
References: nytimes
Share on Facebook Share on Twitter Share on LinkedIn Share on Pinterest
For a lot of people, just mentioning the world vodka stirs up associations with Russia. But is it men, or women that come to mind? In Russia, vodka has typically been advertised as a masculine drink, the majority of ads targeted to males. That's changing now.

The lavender, lady-like ad for Damskaya featured above can be seen in a Moscow metro station. The text translates to, "Between us girls." It recently replaced a very macho ad for Olymp which featured a boxer and the tagline, "The time for the strong has come."

As women continue to dominate spending, advertisers have realized they need to capture the female demographic if they want to up their appeal.

"The distillery says it has aimed its marketing at women age 25 to 45 with average incomes and surplus cash, and focused on their families rather than wealthy, upper-class careerists who have been cultivating a taste for dry wine," according to the NY Times.
3.7
Score
Popularity
Activity
Freshness
View Innovation Webinars