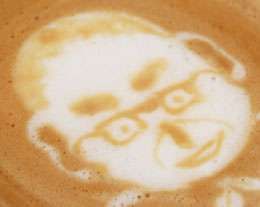 We’ve seen plenty of custom milk froth art on lattes and cappuccino (see below), but the Dalai Latte is the first one we’ve seen inspired by a spiritual leader.

The Dalai Latte espresso drinks are being sold for $3.65 at a Kaohsiung, a southern Taiwan hotel, and feature an image of a man wearing glances, hands in prayer, meant to look like the Dalai Lama. If you have a spiritual leader staying at your place, you have to do something special, right?
3.3
Score
Popularity
Activity
Freshness
View Innovation Webinars