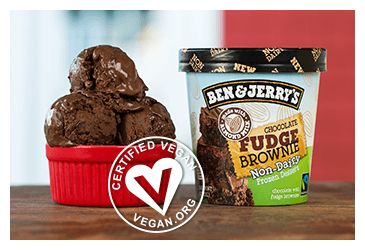 Katherine Pendrill — February 3, 2016 — Lifestyle
References: benjerry & bustle
Share on Facebook Share on Twitter Share on LinkedIn Share on Pinterest
After hinting about the possibility of vegan-friendly ice cream for quite some time, Ben & Jerry's has now released a new line of dairy-free frozen desserts. While it may be the middle of winter, vegans everywhere are rejoicing over the delicious new ice cream flavors.

The new dairy-free desserts from Ben & Jerry's come in four delicious flavors, which include Chunky Monkey, P.B. & Cookies, Chocolate Fudge Brownie and Coffee Caramel Fudge. All of these flavors are based on classic Ben & Jerry's products, except for the Coffee Caramel Fudge variety, which was created specifically for dairy-free consumers. All of the ice creams are made from vegan-friendly ingredients such as almond milk and vegan brownies from New York's Greyston Bakery.

The move represents a major shift in the food industry in that mainstream brands are now expanding their offerings to compete with niche companies.
1.6
Score
Popularity
Activity
Freshness
Get the 2021 Trend Report FREE